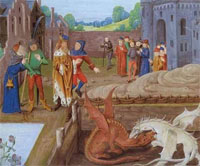 he image of a dragon that most have is of creatures with a rough scaly skin, bat-like webbed wings and vicious claws. Such was the dragon of Wales who fought a lengthy battle with his foe and is now remembered by Welsh on their national flag. The Welsh Dragon was associated with Wales in the Historia Brittonum. This ancient text, purportedly written around 830 by the monk Nennius, is the earliest known history of the Britons, and neighbouring Wales. In the Historia a struggle is described between two dragons dragons, deep underground beneath the hill of Dinas Emrys in Wales which prevented King Vortigern from building a castle in Britain.

The legend of Vortigern tells of the King attempting to escape from Anglo Saxon invaders by fleeing to Wales. He found the mysterious hill of Dinas Emrys and decided to build a castle there. His men set to work building the towers of the stronghold, only to find them collapsed the next day. This went on for weeks, until Vortigern was told the answer to the mystery would be found by a young boy who had no father.

Vortigern sent his men out far and wide to find such a child, and they eventually returned with a boy called Myrddin Emrys ï¿½ or Merlin. Vortigern believed that he was meant to kill the child to stop the towers falling, but Merlin stopped him by explaining that the reason that the towers would not stay upright was that there was a battle raging beneath them between two dragons in a pool. One was White, the dragon of the Saxons, and it was currently winning the battle. The other was Red, the British Red Dragon. This was clearly a metaphor for the Adventus Saxonum the date of the arrival of the Saxons in Britain(around 449). There is one native dragon who inhabited the hill firstand a different, foreign breed of dragon who was fighting it for supremacy.

How the dragons came to be hiding out beneath the hill in Wales is told in the prose poem Lludd and Llefelys, which was written in 12th or 13th Century. This tells a wonderful story about a time when Lludd ruled Britain (c 100 BCE) and came across a problem he could not solve. It surrounded a terrifying scream which appeared from nowhere every May Eve. It cause chaos, as no-one knew where it emanated from, and rumours spread that it was causing infertility and strife throughout the country. At his wits end Lludd asked his brother Llfelys, the King of Gaul, who told him that the noise was caused due to a battle between two dragons. One was native and the other foreign. When the native dragon was losing the battle it would scream. Find the dragons and the problem would be solved.

People at that time believed that dragons changed form, and one form they took was of swine. Lludd captured the fighting dragons while they were in their swine guise by using a cauldron of beer. Having captured the dragons Lludd decided to bury them at Dinas Emrys, deep underground so that the screams could not be heard.

The Red Dragon which appears on the Welsh flag was granted official status in 1959, although it has been used to represent Wales on various insignia many years prior to this. In 1400 Owain Glyndwr raised the dragon standard during his uprising against the occupation of Wales by the English King. Ironically, however, a mere fifteen years later the English King Henry V himself flew the Red Dragon standard at the Battle of Agincourt against the French. This was partly because they used a large number of Welsh longbowmen for the battle ï¿½ which Shakespeare alludes to in his play Henry V. When Henry Tudor won the Battle of Bosworth Field, taking the English throne from Richard III, he carried the Red Dragon standard in state to St Paulï¿½s Cathedral. Shortly afterwards the Tudor livery of green and red was added to the background of the flag, and thus it remains to this day.