The History of Dragons

For more than seven centuries, dragons have played a role in lore and legend.

lthough the time that dragons first appeared in myths isn't known for sure, they can be traced back as far as approximately 4000 B.C. Dragons are said to have been able to live almost anywhere, depending on the type of dragon mentioned. Their habitats range from the center of the earth to the middle of the ocean. They could also be found in caves, fire, or anywhere dark and damp.

Stories of dragons appear all throughout history and almost every culture has their own idea about dragons. Some reasons for this could be the finding of dinosaur fossils. Dragons could be used to describe the indescribable bones of unknown creatures. There are stories about dragons in every part of the world, with the exception of Antartica. Even though there are no people in Antartica, which in that way would seem to make it attractive to dragons, the climate proposes a problem for these creatures who like fire or live in water, but not ice water.

One type of dragon, or sea monster, was feared back in the time of Christopher Columbus. During this time when the world was thought to be flat, these dragons were said to be at the edge of earth, waiting to eat any one who dared to sail that far into the ocean. This story kept many people from exploring farther into the world. Maps were even made marking the place where these dragons lived. At the edge of the map the words "Here Be Dragons" was almost always printed. 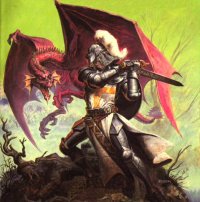 Dragons have also appeared in stories that go back to the time of the gods in mythology. The story of Perseus and the Dragon of Posdeidon tells of a vain queen who almost sacrificed her daughter to the dragon, had it not been for Perseus.

Dragons appear most in fairy tales and myths. In most cases the dragon is the keeper of some treasure, either gold and precious jewels or a maiden in despair. A knight in these stories must come to rescue the girl, or to retrieve the riches. To do this he must slay the dragon.

Almost all young children have heard stories of dragons. A story that arose from the Middle Ages is about a knight, later called St. George, who rescued a princess from a dragon and in return was able to baptize the Pagan people to Christianity. The story says that every year a maiden was sacrificed to this dragon. One year when the princess was going to be sacrificed, St. George decided to rescue her. Using his sword, Ascalon, he was able to stab the dragon and later slay him. This may be one of the most popular heroic stories involving the death of dragons, although there are many. The story of St. George and the Dragon has been told for centuries and the event was even painted by the great artist Raphael. 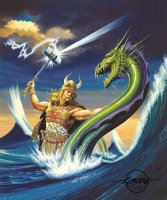 Like St. George and the Dragon, many other stories have been told about dragons and the heroes who kill them. One story like this comes from Norway. The king left his daughter in the castle while he went away on a long trip. He left her a tiny dragon to be her guardian. The princess was skeptical of the tiny creatures, fearing that it could not protect her. However, the dragon soon grew into a large monster. He soon became too good of a guardian for the princess when he grew large enough to wrap his body all around the castle and not let anyone in or out of it. When the king returned home, even he was not permitted inside the castle. The only thing to do was to kill this dragon, so the king offered his the marriage of his daughter to anyone who could kill this dragon. No man in Norway was capable, but a man in Sweden finally killed the beast. As his reward he married the princess and they returned to Sweden together.

Another story is about another young man who fought a dragon for the reward of bringing the king's daughter to his master for marriage. In this story Tristan is tricked by another man who wants the princess for his own wife. In the end Tristan cut off the dragon's tongue as proof of his accomplishment and the lies of the other man were discovered.

During the times of dragons in England, anyone who killed a dragon was awarded knighthood. In ancient Rome, dragons were thought to hold the mysteries of the earth. Romans looked to dragons as a source of knowledge and used them as symbols of strength for their military. They used two forms of dragons, one which was used for heroism, to protect them, and the other, a fearsome dragon, used as a threat. 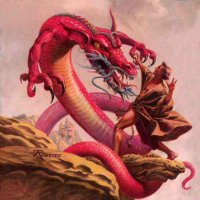 Dragons seem to have come from exaggerated myths about huge snakes, lizards or other reptiles. One type of dragon is actually called the Wyrm, and has a very snake-like form, with a dragon head. Another smaller form of dragon is called a dragonlet. These dragons are also venomous and can be deadly. In the story The Dragonlet of St. Pilatus, only man with a bad temper and skills with a sword was able to defeat this monster that was only the height of the hero. In almost every culture and all throughout history there are stories of these magical creatures called dragons.