The Basilisk is a terrible monster who can turn people to stone with its gaze.

he manner in which a basilisk is truly born is a matter of debate. The earliest accounts of the creature say that a basilisk is hatched by a cockerel from the egg of a serpent or toad. As the legend of the basilisk spread, it was added that the egg had to be round and yolkless, it had to be laid under Sirius (the Dog Star), and the rooster that hatched it had to be seven years old. Though similar, it is not to be confused with a cockatrice that was hatched by a serpent or toad from the egg of a cockerel.

The basilisk's true appearance has also changed over time. When it first appeared in stories, it was described as a small snake from Cyrene that is not more than twelve fingers in length with a white spot on its head resembling a crown. Over time, the white spot became a crown shaped crest and then it became a serpent body with the head of a cock and on rare occasions the head of a human. Though it may look like a snake, it does not move like one. The basilisk moves along the ground not by flexing its entire body left to right like all other snakes, but by raising the front half of its body and moving forward with its head held erect.

A basilisk's powers are truly terrifying. It is able to kill anything that meets its gaze including humans, animals, as well as plants. All other serpents will flee from the basilisk's hiss. Its touch is poisonous, killing all living thing it touches and in some cases, its poison can travel through a weapon to kill the wielder. Its very breath can wither vegetation. It is so venomous that it can actually crack and break any stone it comes in contact with. Wherever it goes, it leaves a path of poison and death. 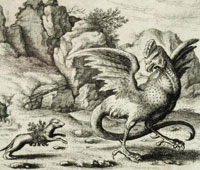 How to defeat this monster is as contended as how it is born. The most widely known way to defeat it is through the crow of a rooster. You must first locate the basilisk's burrow by following its trail or finding a concentrated area where the soil and plants have been affected by the creature's poison. When you find it, you must throw a rooster down the hole so when it crows the basilisk is sure to hear it and perish.

Another popular way of defeating this dreaded monster is by causing it to gaze upon its own reflection in a mirror. Some say that if a basilisk sees its own reflection it will drop dead of fright while others believe it will merely stun the creature. There is a legend of a man who was able to capture a basilisk with the help of mirrors. He went into a cellar where the bodies of two children were found and wearing large sunglasses, a leather coat covered in mirrors and carrying a rake to catch the creature with. He was able to seize the monster with the rake and imprison it.

When a basilisk is killed, its body can be hung in a home to deter spiders and has been hung in temples to keep birds away. It is also thought that the ashes from a basilisk can be used in an alchemic formula to turn silver into gold.