The dragon is an important and revered symbol in China.

he Chinese dragon is a symbol of wisdom, power, and luck in Chinese culture. Unlike western dragons, oriental dragons are usually seen as benevolent and kind. Dragons have long been a symbol in Chinese folklore and art. Temples and shrines have been built to honor them.

Through the symbol of the dragon, many Chinese see divine attributes which they aspire to themselves. In fact, the Chinese are sometimes referred to as "descendents of the dragon." The dragon is held in reverence and respect in Chinese culture. It is unseemly to defile a depiction of a dragon. Dragons are referenced by several Chinese proverbs.

Chinese dragons control the rain, rivers, lakes, and sea. They can ward off wandering evil spirits, protect the innocent, and bestow safety unto all. They are called lung or long in the Chinese language.

They fly in the sky among clouds. Most pictures of Chinese dragons show them playing with a flaming pearl. Legend has it that the pearl gives them their power and allows them to ascend into heaven.

The Legend of the Carp says that a carp able to leap over the mythical Dragon Gate will become a dragon. Many have sought out the true location of this Gate, but none have found it. Several waterfalls and cataracts in China are believed to be the location of the Dragon Gate. This legend is an allegory for the drive and effort needed to overcome obstacles.

Chinese dragons have serpentine bodies, four legs, and are usually without wings. They are said to be a composite of various other animals-the body of a snake, the antlers of a deer, the talons of an eagle, the soles of a tiger, the scales of a carp, and the eyes of a demon. It is said that Chinese dragons have 117 scales. 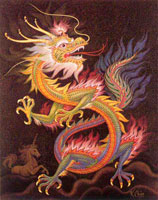 There are nine types of classical Chinese dragons. They are as follows: